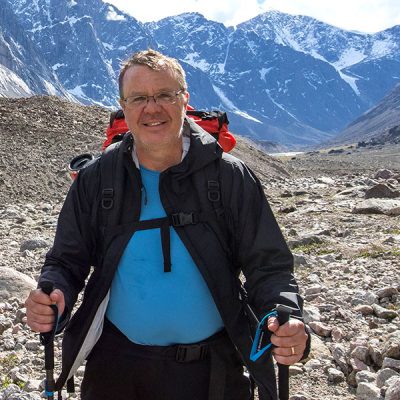 Doug Welch completed and defended his PhD in Astronomy & Astrophysics from the University of Toronto in December 1985 and his degree was conferred in 1986.

He engaged in postdoctoral work at the National Research Council’s Herzberg Institute of Astrophysics’ Dominion Astrophysical Observatory in Victoria, BC – first as an NSERC Visiting Fellow and then as a Research Associate.

Dr. Welch was the 2010 recipient of the McNeil Medal of the Royal Society of Canada. The medal is “awarded to a candidate who has demonstrated outstanding ability to promote and communicate science to students and the public within Canada (the term public is defined in its broadest sense).”

His group’s research focus in recent years has been on what can be learned from studying the “light echoes” from luminous transient events like supernovae. Once considered a curiosity or merely a tool for mapping the distribution of interstellar dust near such events, “light echoes” now allow the study of the asymmetry of the events themselves – a key observational constraint for computational models of supernovae explosions. Furthermore, centuries-old supernovae which occurred before the advent of modern scientific instrumentation can now be observed “again” due to the time delay introduced by the non-direct path taken by the scattered supernova light.